If you’ve never heard of DirtQuake before – Oh boy, you have been missing out! DirtQuake is essentially flat track oval dirt racing, but with a big slab of tongue in cheek fun and open entry to any crazy enough. This year’s event was hosted at the Essex Arena, a stone throw from Lakeside retail hell and M25 traffic hell, but dead handy for us all London folk. The Essex Arena normally hosts all kinds of Speedway and banger racing, so was perfect for DirtQuake.

Racing was split into a number of classes:

The last DTRA class were all experienced pros, with serious skills, serious bikes (mainly Indian FTR’s and Ducati Scrambler 1100’s) and were extremely rapid. In contrast, the first five classes had a random mixed bag of contenders from novices to celebs like Guy Martin and Jenny Tinmouth, and many in fancy dress to boot! They featured an even more eclectic collection of bikes, from brand new Husqvarna Vitpilen and Ducati Scramblers, stripped down sports bikes (an R1), random street bikes, the odd adventure bike (a Super Ténéré), right through to classics like a RD350 and a Vincent Rapide!

END_OF_DOCUMENT_TOKEN_TO_BE_REPLACED

Last weekend I popped by Llangollen Motorcycle Festival up in North Wales. Having not attended before and staying with family nearby, it seemed like a good day out plan. Situated on the Royal International Pavilion ground in Llangollen (pronounced Lan-gof-len), a short walk from the town centre, the event saw thousands of bikers descend to check out bikes and attractions on show.

In the pavilion there were hundreds of classic and famous bikes on show, from famous race bikes to old Brit bikes from times past. Celebs John McGuinness, John Reynolds and Steve Platter gave talks and Q&A sessions, with some interesting opinions from McGuinness with regards to Honda! Outside, there were many stalls to pick Motorcycle gear, new bikes to check out from Triumph, Indian and Suzuki – who were offering test rides for visitors. It was interesting to see the new Triumph Street Triple R low in the flesh – very few seem to be available at dealers for test rides. Something Mary and other shorter female friends are tempted by; my daughter at 5′ tall could pretty much flat foot on it.

END_OF_DOCUMENT_TOKEN_TO_BE_REPLACED 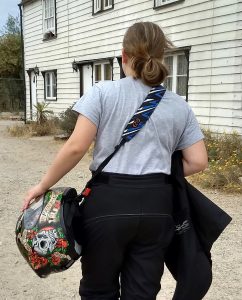 Picture the scene, there you are parked up in town to do a spot of shopping, juggling your helmet as you try to carry shopping and find your wallet to pay for stuff. If only you had a third hand or somewhere to put your helmet. You don’t fancy leaving a few hundred quids worth of lid hanging on the bike, especially with action cam and intercom gadgets attached and you may not have a huge top box to dump it in(or it may be full of other stuff). This is where the EZ-Go helmet strap comes in as an idea you can’t believe you didn’t think of.

In essence the EZ-Go is a simple padded strap with helmet ratchet clips on each end. You just slot the two ends into the two halves of your helmet’s ratchet strap, then carry it over your shoulder. A two second job, that frees up your hands whilst you’re out and about. Genius!

END_OF_DOCUMENT_TOKEN_TO_BE_REPLACED 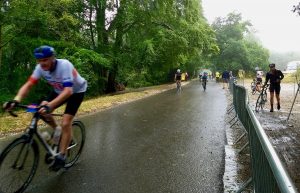 Well you’ve got to love the Great British Summer… Insane, heatwave for weeks, then the weekend you’re scheduled to spend on the bike, it pours down something chronic!

Last weekend I volunteered to help our with the Prudential Ride London cycle endurance race, scheduled to have around 40k Lycra warriors tackling a 100, 46 or 19 mile route. My job was to carrier a cycle mechanic pillion with a tonne of tools and supplies and sweep up those stopped with bike or medical trouble. I feared I’d be dealing with loads of heat exhaustion and dehydration cases, but no, we were dealing with countless punctures and freezing wet cyclists instead. I lost count of how many inner tubes we got through, with many cyclists hit by repeated punctures.