Continuing on from my previous post on motorcycle filtering tips on motorways and dual carriageways, today I’m going to talk more specifically about filtering in the city and more suburban roads (that’s lane-splitting for the US readers). In the city, one needs to far more alert and aware of upcoming hazards. There is much more to watch out for compared to the motorway, lanes tend to be tighter, traffic is turning and pulling out of everywhere, you have to contend with delivery scooters, cyclists, pedestrians and all their related street furniture and road markings. After riding through the city a number of years, filtering has become almost second nature, below are some filtering tips and advice I have accumulated.

As mentioned in my previous post, it is legal to filter in most instances. Below are some instances where the highway code says you must not do something and are thus making filtering illegal in these cases. You must not:

Below are instances that the Highway code says you do not or should not, thus not illegal, but will potentially be held against you when assigning liability following an incident:

In general, the best advice is to keep speed low, cover your brakes and look far ahead. No, even further ahead! Hazards can appear quickly and split-second reactions are crucial. It’s imperative to look ahead, read the road and second guess what the traffic is going to do. ‘Why’s that taxi slowing and pulling into left – because he’s going to pull a U-Turn – ahh!’

Speed-wise, a good rule of thumb is not to filter more than 10-15mph faster than the neighbouring traffic and not to filter at speeds above 40mph.

You should also be aware that if you are involved in an accident whilst filtering, previous legal cases don’t set a very good precedent. You will be lucky to do better than a 50/50 liability. 🙁

Check out my video on the legalities of motorcycle filtering: 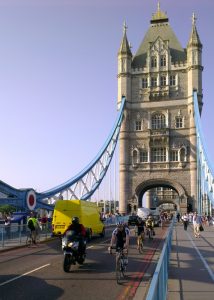 So without further ado, here are 10 kay lane splitting tips you should find beneficial when city riding:

4 replies on “Motorcycle Filtering Tips for the City”

I think, on legality point 2. about filtering on zigzags, that you are allowed to filter so long as you don’t pass the lead vehicle (as you then go on to cover in point 6).

Also, I would apply tip 2 to all locations, not just bus stops and other likely crossing spots. I certainly found in London that pedestrians would cross between stationery traffic in any and all sorts of places, across multiple lanes, and it was very rare someone would positively look between lanes of cars for thinner modes of transport still making progress. The worst case I encountered was a girl texting, with headphones on, as she crossed through two lanes of static cars. She remains completely unaware to this day that I nearly ran her down (at low speed, because I was fortunately watching for people doing exactly what she was doing).

Totally agree, you have to assume pedestrians will just step out onto the road without looking. Some chap did exactly this on my way to work this morning. Staring at the floor and just walked out into the road and almost into the side of me. Thankfully I was just creeping along at about 5mph.

Filtering is essential when you are traveling in London. However when filtering towards the red traffic lights these are my experiences:

I have had pedestrians just coming out of the stationary traffic looking in opposite direction.

Cars abruptly pull out to get in the lane to the right before the traffic lights.

People crossing in front of the bus and looking in the opposite direction!

So! if you are filtering: Keeping slow speed and expecting something something to happen is probably the best advice.

Point 7 on What’s Legal and What’s Not. Have you got the words to the ‘keep left sign/ballad? The tune is buzzing in my head but I can’t remember the lyrics. Good site by the way.