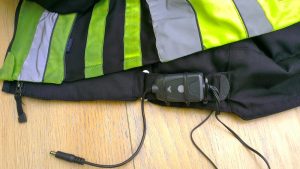 The package consists of a pair of gloves (obviously), a junior controller with leads, a battery lead with inline fuse holder and a big bag of different fuses. Installation is pretty straight forward: first, choose the appropriate fuse, then screw the battery lead to the battery and thread the plug out under seat to somewhere convenient. Then thread the junior controller leads through the arms of your jacket and attach the control box to the jacket waist (see pic left). Now, when setting off, it’s easiest to plug the gloves into the wires hanging out of your sleeves before putting the gloves on. Then sit on the bike and plug control box into battery lead. Press button and go!

The controller box button cycles between 4 levels of heat, with a different colour light indicating which is selected. The gloves get lovely and warm, the backs of the hand more so than the fingers, but numb fingers are definitely a thing of the past. The construction of the gloves is very good, a mixture of real leather and textile, with plenty of armour protection on knuckles, tops of fingers and round wrist. There’s also extra padding on the palm, which is where you really need it, should you come off. In fact, the gloves are pretty warm in their own right, about on par with my Alpinestar Jet Road and better than my older Hein Gerike Pathan gloves. Out of the box, you are warned the gloves aren’t waterproof and need treating to make them such. OK, a bit annoying, but a dose of Nikwax soon fixes this. The Nikwax did make the palms a bit slippery at first but was fine after a day or two. I’ve had no leaks of soggy hands since though. One downside, is they have no ‘wipe’ blade on them, for wiping your visor clear (edit: a visor wipe is added in the later 2013 iteration of the ZR12’s). 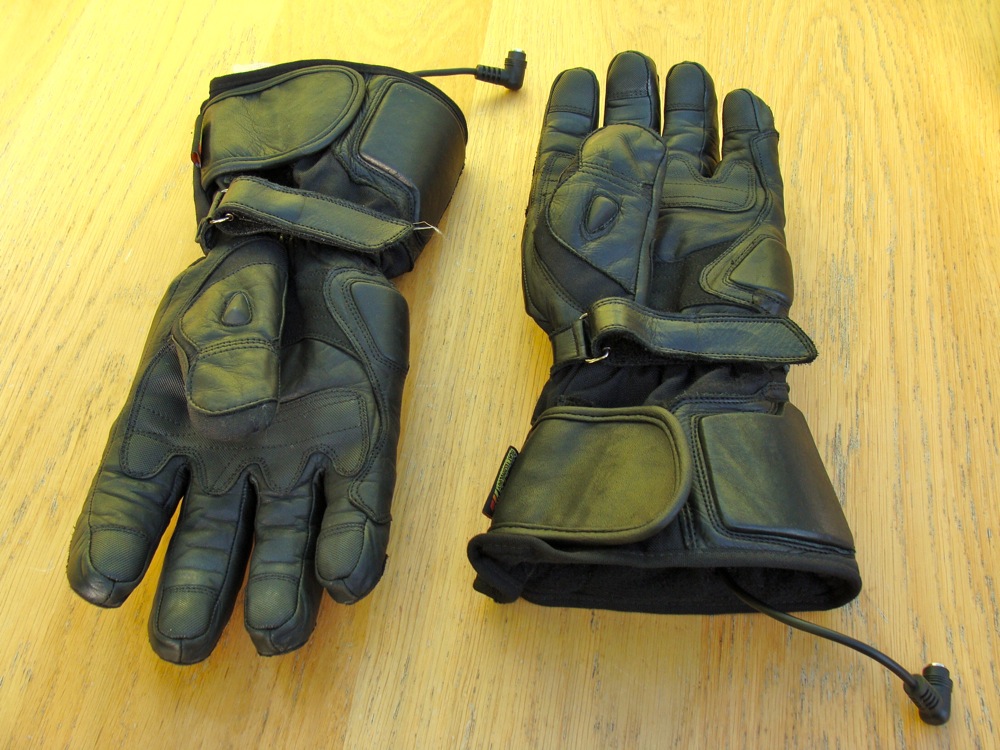 In conclusion, yes they’re expensive, yes they are a little fiddly to plug in before setting off. But, no cold hands and warm fingers makes such a difference, you can shrug off the crap weather, you can concentrate on riding without the distraction of painful fingers and get back to enjoying your time on the bike. If you plan to commute through the coming winter, I can wholeheartedly recommend these heated gloves for motorcycles.

Epilogue: I’ve had these Gerbing heated gloves for 4 months now, but there are some serious questions of reliability hanging over them. In that time I’ve been through three controllers and one glove has stopped heating up completely. Read my recent post on Gerbing reliability here.

Epilogue (2): Gerbing’s replaced this 2012 model with the later 2013 model, with a large number of improvements. But best of all, they have lasted use every day over the 6 months through the winter without any reliability concerns. Read my more recent post on Gerbing’s New Features.

Epilogue (3): The 2013 iterations of the XR12 gloves have held up far better, lasting until 2016. They were swiftly replaced under warranty again I write this in 2020 and I’m still wearing this last pair each winter! Looks like Gerbing has nailed the early reliability issues. It should be noted that throughout Gerbing has honoured their lifetime guarantee of electrical components without question and always with prompt replacements.