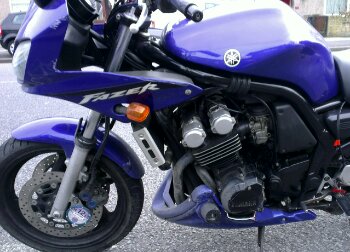 The other night on the way home from work I had an off. Thankfully at very low speed and just a slight clip, so no injuries or serious damage.
I was approaching a red light junction with two lanes to turn right. The first of these had two stationary cars, the second was clear. So I took the second clear lane and prepared to pull up at lights. However a car on the left  suddenly pulls out into the second lane, causing me to swerve, just touching his car and come off.

Bike now has some cosmetic damage, cracked and scuffed faring and a crumpled bust belly pan. Indicator was bashed in, but thankfully has a rubber mount, so just clipped in. Bike still rides fine, just looks a mess.

However, the other party was very reluctant to exchange insurance details. Firstly, he promptly moved his car around the corner away from the traffic, then insisted he wasn’t to blame and as there was no damage to his car, there was no need to pass on his details. What a wanker.  In the end, it wasn’t until I started calling the police did he dig out his insurance details. He did eventually concede he changed lanes without indicating and ‘just didn’t see me’ – didn’t check his blind spot. He has a big scuff mark in the dirt on his door, where I clipped him (which I photographed)

Insurance claim is under way, just hoping the other chap doesn’t spout some bullshit to his insurance firm and leave me to fight this one out. Going to try put off any repairs and costs from the insurance until blame has been assigned, I don’t want to be left out of pocket if the other chap is an arse.