Over the past few months of lockdown, I’ve been watching many motorcycle films to while away the time until I could get back out on my bike. Of course, we all love movies with bikes, and so here I have rounded up a number of iconic motorbikes on film. Some from films portraying motorcycle (counter) culture, some just excellent stylistic choices supporting other narratives. All highly memorable and movie motorcycles I’m sure we’d all to ride. 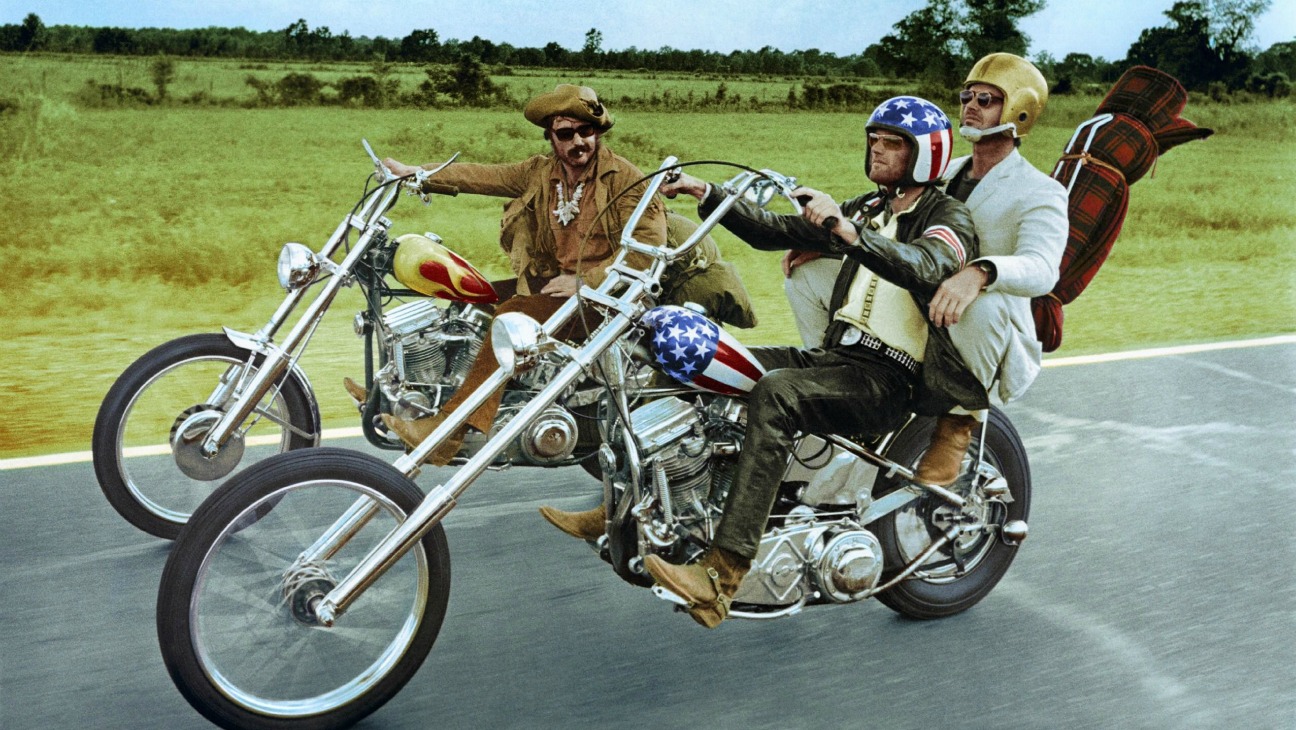 No list of bike films would be complete without Easy Rider and the story of Wyatt (Peter Fonda) and Billy (Dennis Hopper) checking out of mainstream society and undertaking a journey from LA to New Orleans Mardi Gras to discovery America and themselves. They pick up Jack Nicholson on route for a drug-addled and tragic ride across middle America.

The custom choppers were built by Cliff Vaughs and Ben Hardy, from 1949, 1950 and 1952 Harley-Davidson Hydra-Glide ex-police bikes. Four bikes were built to provide backup in case some broke down or got trashed to avoid filming delays. 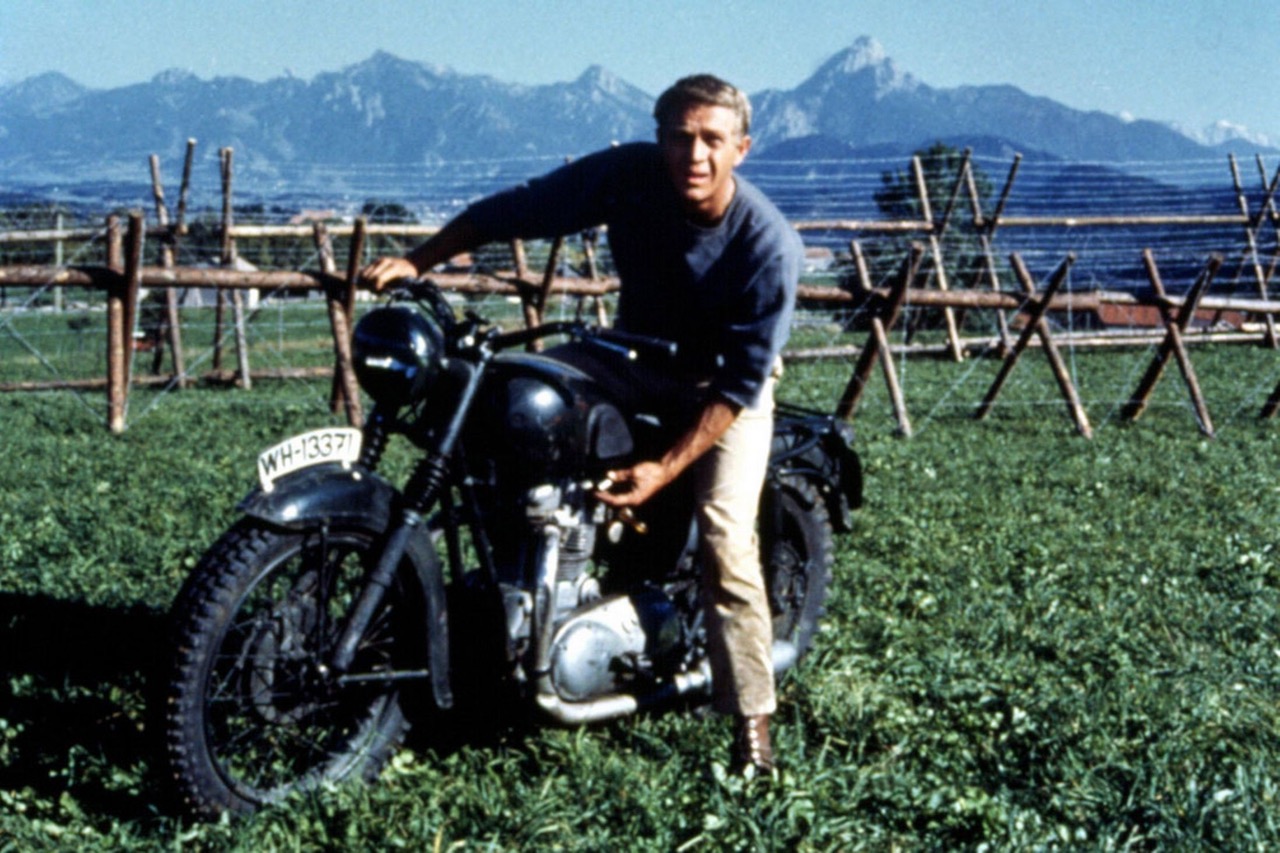 In this WWII film about escapees from a German concentration camp, Steve McQueen rides a modified 1960 Triumph TR6 Trophy, but a close friend and stunt double, Bud Ekins pulls off the infamous jump over the barbed fence. Clearly not historically accurate, with the German soldiers apparently riding 196o’s Triumph bikes, but never mind.

Do also check out Guy Martin’s recent documentary where he re-enacts the famous leap on a modern Triumph Scrambler and delves into some of real-life history of the prisoners of war and their escape from the concentration camp. 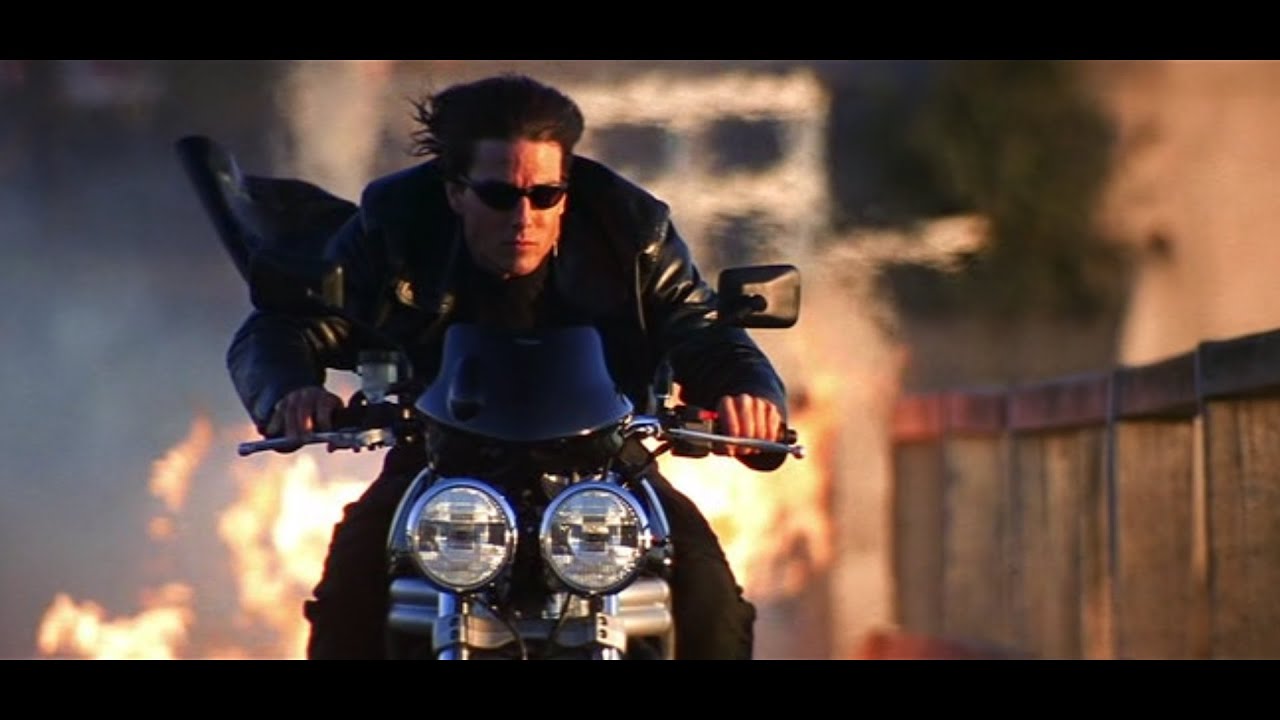 Tom Cruise is no stranger to motorcycles, having rocked a Kawasaki GPz900R in Top Gun back in the ’80s and with a sizeable personal collection of bikes. In Mission Impossible 2 we see Tom hooning around on a Triumph Speed Triple whilst laying to waste plenty of bad guys in a gunfight. Lots of stunts, fast action and big explosions from this now-classic round twin head headlight Triple. 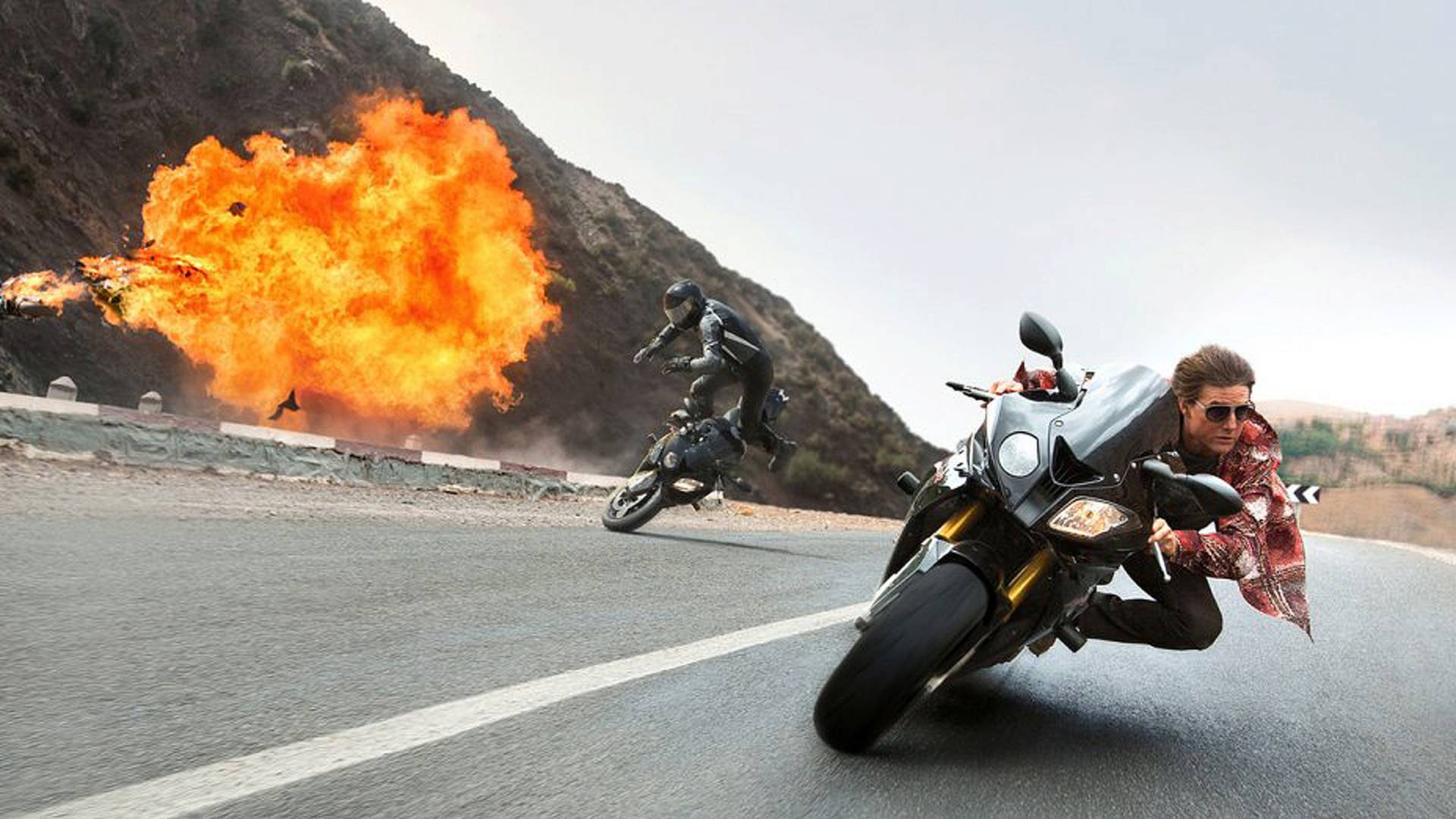 Later Mission Impossible films see Tom switching to the BMW marque with the likes of an S1000RR and RnineT Pure. Tom claims to do as much of the riding and stunts himself, well the non-messy bits before CG takes over at least. 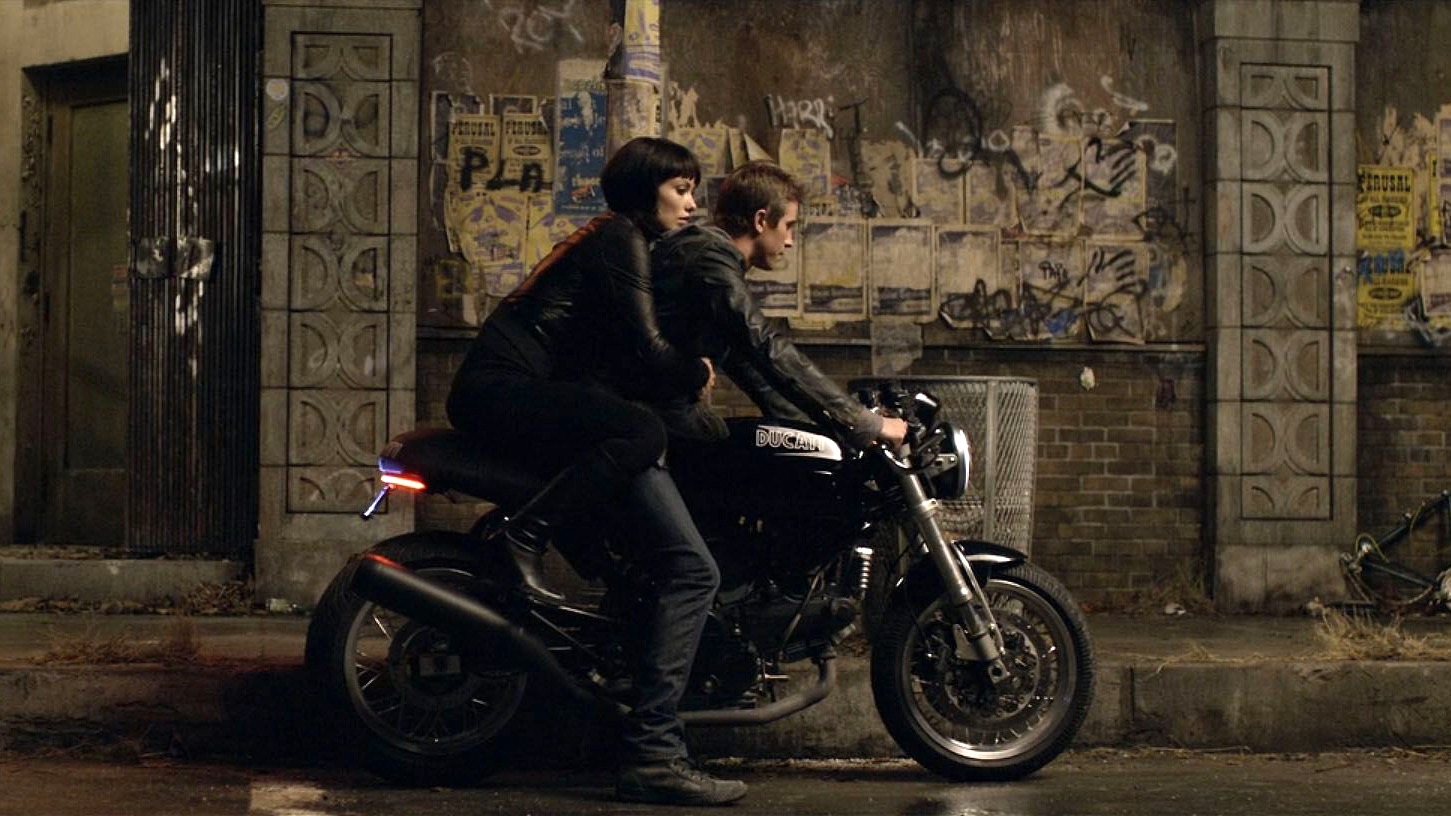 Aside from all the CG light bikes when in the ‘grid’, Tron Legacy features a super slick Ducati Sport 1000 Biposto cafe racer. With a 992cc L-twin engine, it was only produced from 2007-2010 and sadly too premature for the retro bike revival. Ridden by Garrett Hedlund, as Sam Flynn, son of Kevin Flynn (Jeff Bridges), It continues several years from where original 80’s Tron film left off, accompanied with a stonking Daft Punk soundtrack, it’s actually pretty enjoyable for a Disney flick. 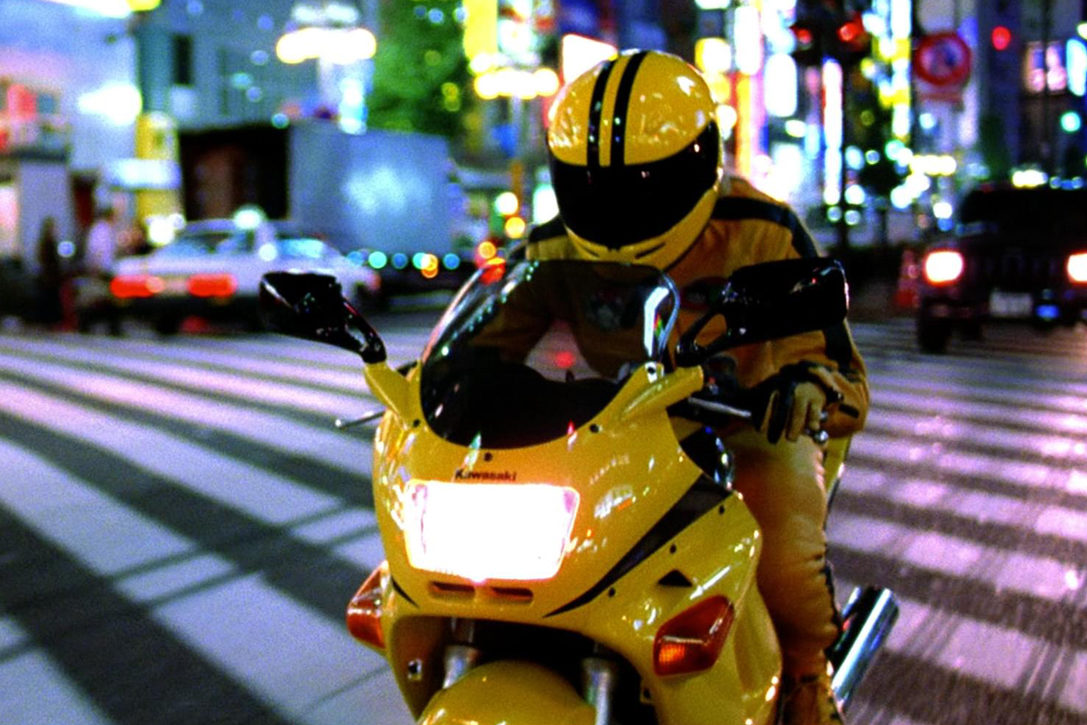 In this first part of Quentin Tarantino’s epic kung fu double bill, Uma Thurman rides a yellow Kawasaki ZZR250 as Beatrix Kiddo, whilst her Crazy 88 gang foes ride on Yamaha FZS400’s. Motorcycle action only lasts for a short scene, but still makes for a cool stylized dash across the Tokyo streets with handy katana swords mounted on all bikes.

The small engine FZS and ZZR’s are obviously Japanese only models targeting local emission/license restrictions and are rarely seen over here in the UK, where the 600cc variants of both were popular.

Many of the Bond series have featured cool motorcycles, more often ridden by bad guys giving chase (because motorcyclists are just bad and menacing!) The later films had some pretty heavy product placement. With the BMW brand heavily featured in Tomorrow Never Dies, Pierce Brosnan rides an R1200 C cruiser through a mad chase scene in Saigon. Stunt riders really pushed the bike to the limit including a 44′ rooftop leap, not bad for a 250Kg beast. Out of 15 bikes bought for the film, 12 were trashed, but you can find one of the surviving at the National Motor Museum in Beaulieu, UK.

In No Time To Die we see Daniel Craig riding a Triumph Scrambler 1200 XE, and of course, a limited edition run of tie bikes went on sale to coincide with the movie. Well, they would have done if the movie hadn’t been delayed due to Covid19. The film also sees Bond on a Tiger 800, and baddies on Ducati Scambler 800’s. 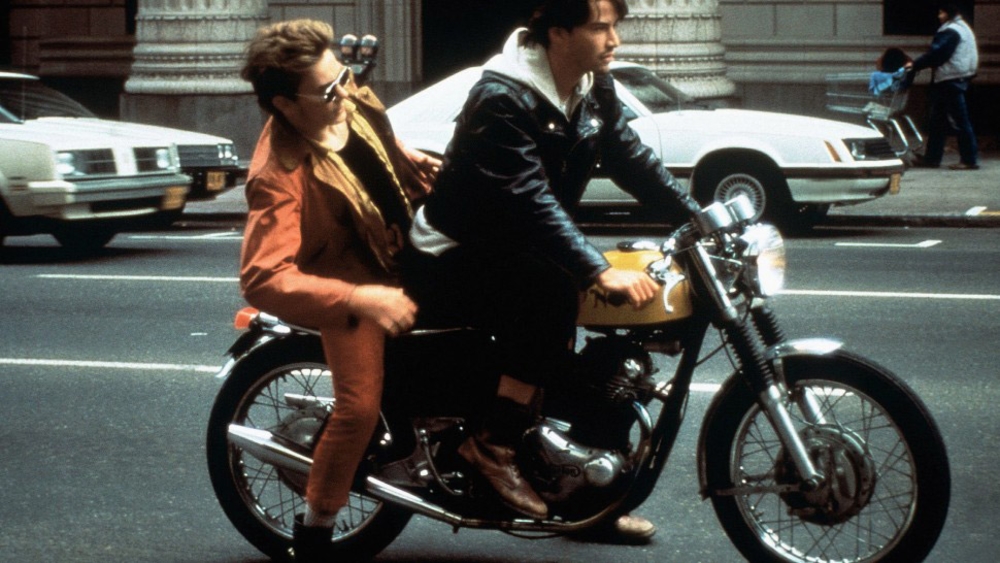 This less well-known film features Keanu Reeves and River Phoenix as drug-addicted hustlers living on the streets of Portland, who undertake a journey of self-discovery. Keanu rides a 1974 Norton Commando 750 20M3S, which was actually his own personal Norton. Prior to filming Keanu rode his Norton 1300 miles from Toronto to Florida to personally persuade River to play in the film.

Keanu Reeves continues his affection for motorcycles today, as a key partner in the Arch Motorcycles who build ‘totally excellent’ high-end customs.

Find My Own Private Idaho on Amazon 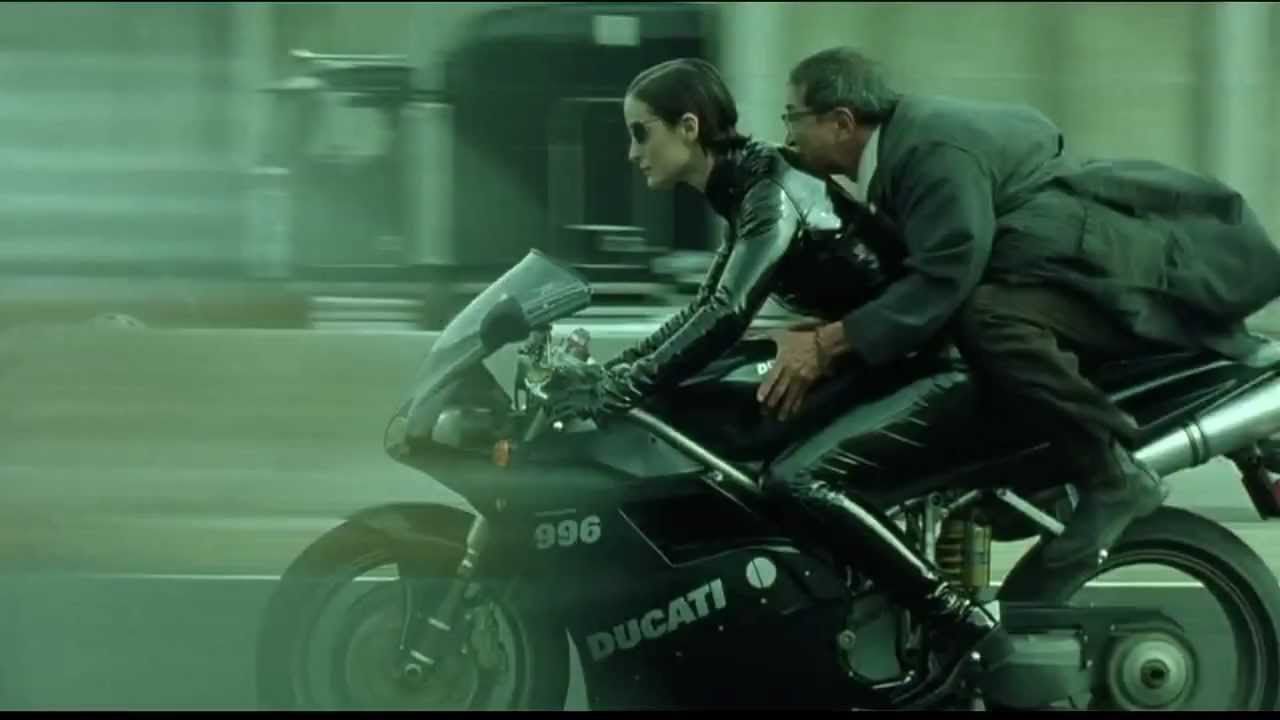 A classic motorcycle chase scene from the Wachowski’s Matrix trilogy, sees Trinity (Carrie-Anne Moss) doing some rather advanced lane splitting on a 2001 Ducati 996 on a specifically built Freeway set. The whole scene is alleged to cost $2.5m to film, with nine Ducati’s used in the filming, one of which now lives in Keanu Reeves’ personal collection.

Ducati subsequently released a number of limited edition Matrix Ducati 998 in 2004. Yes, 998, not quite the same as the 996 in the film, close enough I guess.

Find the Matrix trilogy on Amazon 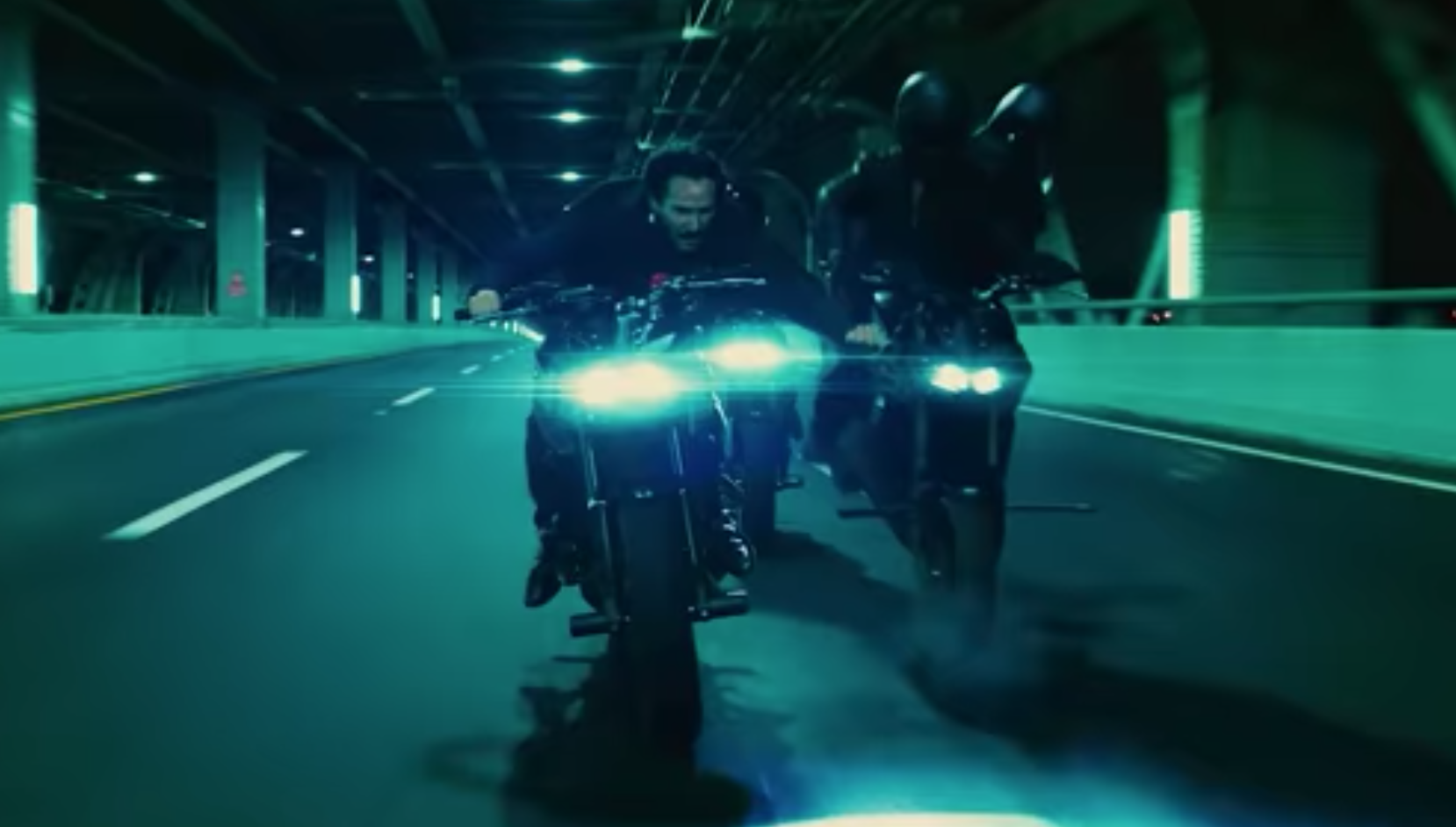 Continuing the Keanu Reeves theme, the third John Wick movie has a mental motorcycle fight scene, where Keanu fends off a whole bunch of sword-wielding bad guys. Everyone is riding Yamaha MT-09’s, but suspend your belief as the scene is a clever inter-splicing of on-road footage and more static on set green screen footage where each actor’s MT09 is on a trolley shoved around by lots of guys in green suits! CG magic makes the whole thing seamless, check out this behind the scenes making of the vid. 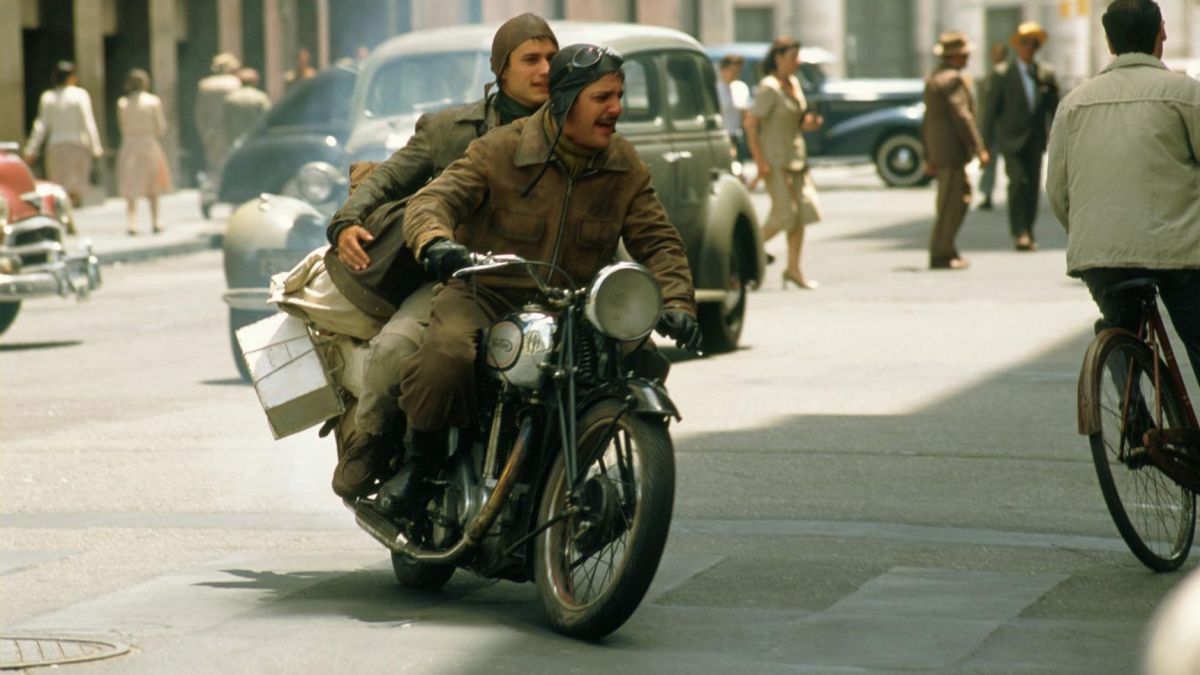 This Brazilian film tells the coming of age story of Ernesto ‘Che’ Guevara (played by Gael García Bernal) and his friend Alberto Granado (Rodrigo de la Serna) as they travel from Argentina to Puru in the 1950s. They set off on a battered single cylinder 1939 Norton 500, which fails them halfway through. The journey is an eye-opener to Che of the oppression, hardship and poverty that so many suffer on the South American continent, and ultimately driving his later revolutionary stance to address the injustices.

Based on Che Guevara’s own travelogue from the journey, the film is beautifully shot and in stark opposition to the stereotypical motorcycle gang and outlaw image shown in other films for this time period. A must-see film.

Find The Motorcycle Diaries on Amazon 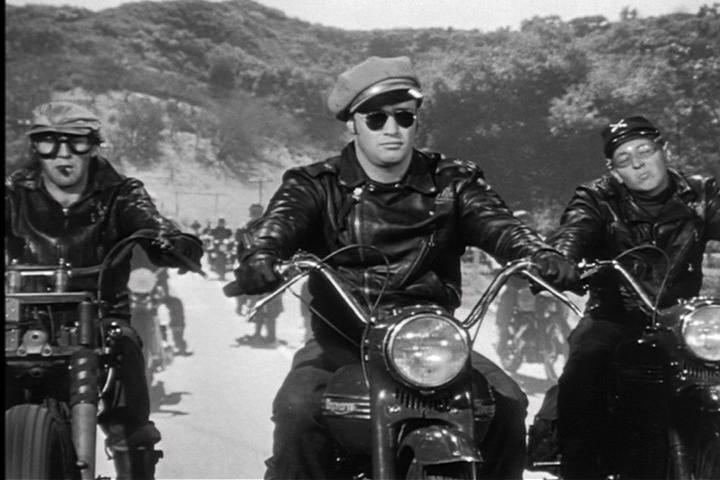 This 1953 film featuring Marlon Brando in his prime, tells the story of post-war US motorcycle gangs terrorising a small town. The macho gang lead Johnny Strabler (Brando) riding a 1950 Triumph Thunderbird 6T, became an icon for teenage rebellion and the film is considered the first to cover outlaw motorcycle culture. Highly controversial at the time and banned by the BFI until 1967, but all rather tame behaviour in comparison to today’s standards.

Find The Wild One on Amazon

In Philosopher’s Stone Hagrid (Robbie Coltrane) take Harry Potter (Daniel Radcliffe) for a ride in a 1959 Triumph 650 T120 Bonneville sidecar outfit. However, in later films, this was switched for a newer 2009 Royal Enfield Bullet 500, with a sidecar outfit built by Watsonian.

You can check out the Royal Enfield at Harry Potter world and enjoy Hagrid’s Magical Creatures Motorbike Adventure ride at Universal Orlando. 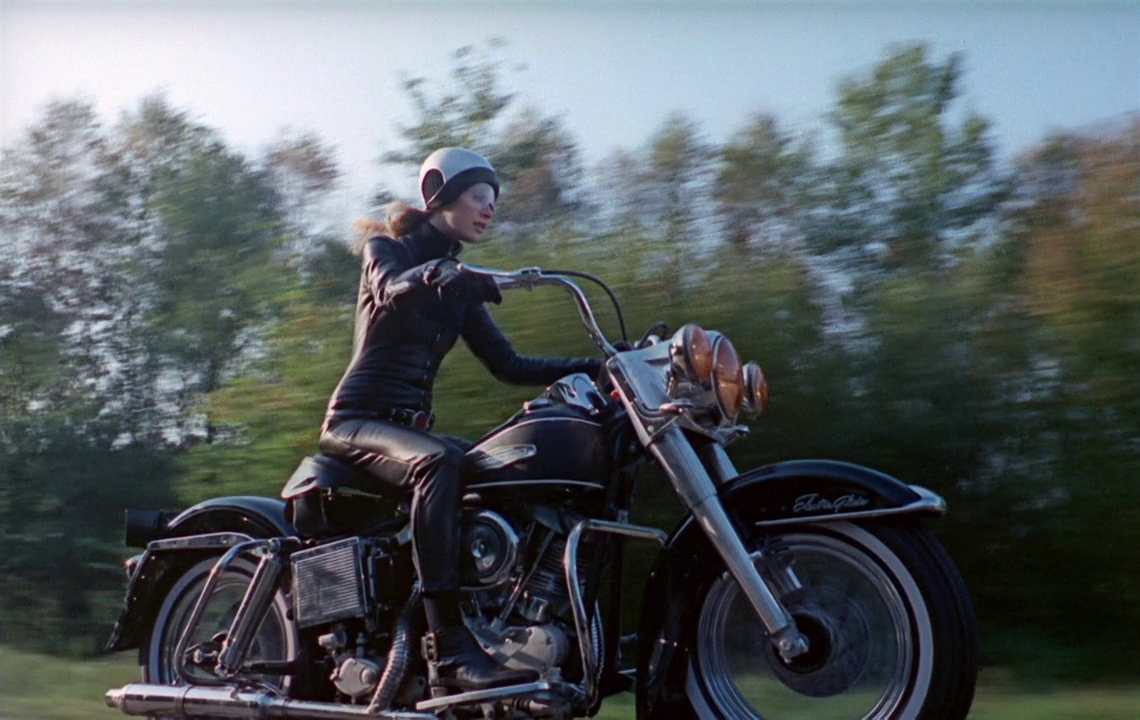 Find Girl on a Motorcycle on Amazon 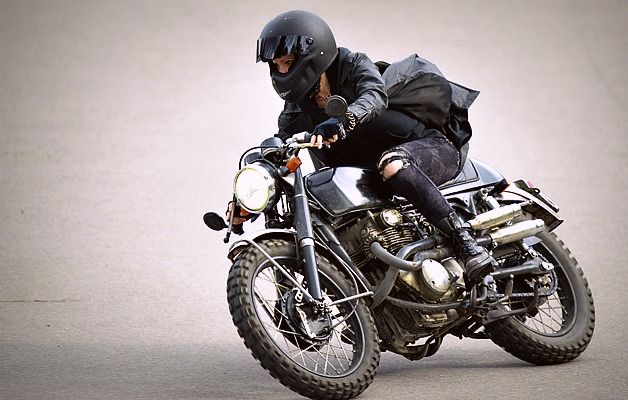 In the 2011 English language version of this film by David Fincher (not to be confused with the Swedish language 2009 film adaptation), we see Lisbeth Salander (Rooney Mara) create a custom cafe racer from an old Honda CL350. The bike was actually built by GLORY Motor Works for the film, with the basic and gritty looking custom suiting Lisbeth’s character in the film, true to Steig Larsson original novels. That, or just bang on trend as the hipster custom cafe racer culture exploded around the same time. Either way, it’s a damned moody looking little bike that looks like it’d be a blast to redline.

Find The Girl with the Dragon Tattoo on Amazon 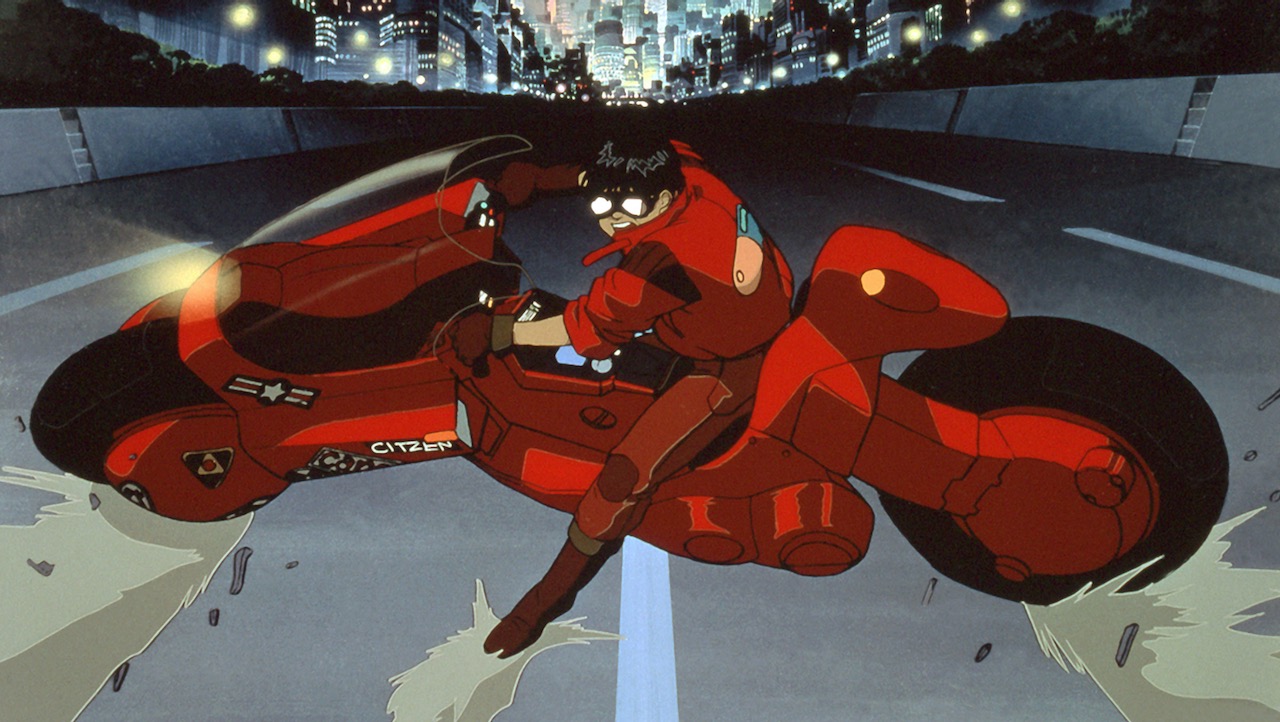 We can all dream about Katsuhiro Otomo creation in the Japanese anime Akira. Shotaro Kaneda’s bike may not be real, but who can not love the scene of biker gangs chasing through the streets of Tokyo leaving a trail of destruction. The gorgeous animation, the streaks of tail lights and oodles of cinematic style. Did you know the engine sounds were made from splicing recordings of a MiG-21 fighter jet and a 1927 Harley-Davidson?

Some say the bike inspired the 2015 Honda NM4, though possibly a bit tenuous. However, in 2012 Masahi Teshima built his own replica, costing him $120k and seven years of work and looking pretty special.

Do you know of any other famous motorcycles in films? Can you recommend other movie motorbikes where a great bike is one of the cast? Do let me know in the comments below.

3 replies on “Famous Motorcycles in Films”

Hi Arthur, for me it was the first ‘x’ film I managed to sneak in to see, travelling from Hereford to Ross on Wye to see it because it was known that the myopic old lady in the ticket office had no concept of the age of the patrons! It was a double bill of Mad Max and Mad Max 2 (around about 1982?), which started a life long passion for bikes. Mad Max 2 was the one that had the real impact. It was an incredible experience with that long chase scene at the end making my eyes pop out. The journey back in a 1100 escort van seemed rather lame in comparison! There’s no one specific ‘star’ bike in the film but it looks to me like there is a healthy smattering of Kawasaki Zs. Since watching it for the first (of many) times I’ve always wanted a Z1 or similar. I’ve never had one but made do with an import 400 zrx for while and now have a street twin. Both purchases probably inspired by the impact of watching that film nearly 40 years ago now. Time flies. Thanks Rich

Yes, I did like the Mad Max films. Agreed 1 & 2 were classics of the 80s and really captured the cold war mood with their post-apocolyptic near future storyline. The third Thunderdome film was a bit of a let down in comparison, but I did enjoy the latest Fury Road film that brought us some epic chase scenes again. As much as I’m sure the Mad Max films inspired countless rat streetfighter custom bikes, many that were pretty cool, personally I’m a sucker for a well maintained classic in stock unadulterated form. 🙂

I trend among retired American men nowadays seems to be replicating the 1969 Then Came Bronson motorcycle from the movie and the TV series am doing it also. It seems that these men (myself included) were teenagers when this connection happened was deeply connected to this TV show, movie and motorcycle. Replicating this motorcycle isn’t too difficult because Harley Davidson sportsters haven’t changed over the years. The original one is 1969 or possibly a 1968 used for the movie. Mine that I’m working on is a 1998 model. A YouTuber “BUICK MAN” has posted videos with a lot of detailed information.