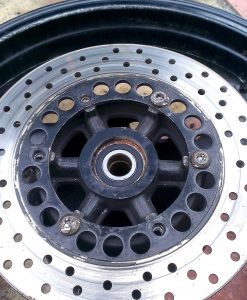 Further research revealed just how common the issue is, with original Yamaha thread lock used seemingly some super strength solution. Unlike the front discs, the rear is not floating, so more heat is transmitted to the bolts and wheel increasing the likelihood of them seizing. 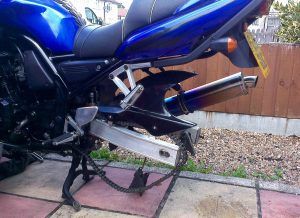 With the removal of the remaining bolts looking like a tricky (and costly) job, I opted to pick up another wheel. eBay was full of FZS600 ( and identical Thundercat) wheels, so I soon blagged one for £32 delivered direct to the garage. Though I made sure I purchased one with the disc already removed! I also opted for a fresh set of bearings too. Those in the replacement wheel were an unknown, my old ones had done 50k and could be damaged during removal. Putting a fresh set in for a tenner odd seemed a no-brainer.

The lesson here is that some jobs are best left to the pro’s with the right tools and expertise.

Wheelies Motorcycles soon sorted out my new wheel, new brake disc, new bearing and swapping over of tyre and sprocket. Labour costs were reasonable and undoubtedly cheaper than spending time extracting the old bolts. The lesson here is that some jobs are best left to the pro’s with the right tools and expertise. Trying to save some cash doing these jobs oneself isn’t always cheaper.