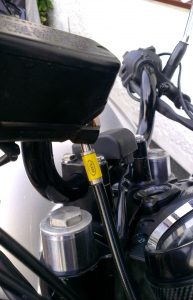 Mary is a little vertically challenged, which can make most motorcycles a bit tricky to ride. At 5’1″ she is only just on tip toes when sat on her stock CBF500, so lowering was essential. Lowering a bike can be achieved by reducing the seat and/or lowering the suspension. Mary’s CBF500 needed both!

Lowering the rear suspension of a bike can be achieved either swapping on longer ‘dog legs’ – the struts that go from bottom of shock to swing arm; or by shortening the overall length of the shock. The CBF500 rear shock mounts directly to the swingarm, thus the latter approach was needed. MFW sell a number of lowering kits including a replacement lower shock linkage for many Honda’s. This replaces the stock linkage of a standard Honda Showa shock, shortening its entire length. The linkage came in for £65, however similarly parts by other brands sell for £100-120. Alternative approaches involve replacing the spring on the shock for a shorter one.

END_OF_DOCUMENT_TOKEN_TO_BE_REPLACED

When it comes to hard luggage and top boxes, the name Givi is synonymous, with this leading Italian brand make some of the most popular luggage on the market. As a London commuter hard luggage is incredible useful for carrying stuff; the essential security chain, work clothes to change into, packed lunch, laptop, books etc. A top box will carry the lot with ease, whilst keeping it all dry and secure. In the event of a spill, you really don’t want to carrying all that stuff on your person.

END_OF_DOCUMENT_TOKEN_TO_BE_REPLACED 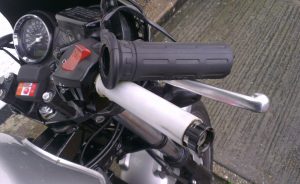 When we bought Mary’s CBF500 it came with a cheap set of heated grips fitted, very handy for the winter. However, their installation was critically bodged. The grips were glued on using a rubber type grip glue, which although fine whilst the grips were cold, when hot the glue became tacky and no longer adhesive. Thus when twisting the throttle, the grip would slip round, and not rotate the throttle! To address this, I consulted internet wisdom and opted for the double side carpet tape method.

END_OF_DOCUMENT_TOKEN_TO_BE_REPLACED

Apologies it’s been a bit slow around here, been suffering from some broadband issues which have hindered updates and have been off the bike away with family for the Christmas/New Year period.

Progress lowering Mary’s CBF500 has been good, but slow. Rear shock refurbished, shortened and refitted, front forks dropped, low seat sourced (NOS genuine Honda one found!) and dropped the bike off at a local workshop to shorten side stand today. Along the way, I hit some issues with the wiring loom full of water and a joint corroded away, requiring some patching up. 🙁  Watch this space for a full low down on lowering the CBF500.

Plenty of new accessories have been purchased ready to fit the CBF500 though: Givi rack, Acerbis handguards, rear hugger and crash bars. Also picked up a better-looking front fender and fuel tank cheap to replace the current ones with a little cosmetic damage. Almost all bits have been sourced cheap second hand, some needing a lick of paint to tart up, definitely going to be a commuters hack / rat bike!

Overall, progress has been slow due to no garage and crappy weather, allowing me to only spend a few hours working on the bike at weekends. Nevertheless, Mary should be commuting into the city on the bike later this month, fingers crossed.

Mary also treated me to a Drift Stealth 2 camera, definitely better than my old Roadhawk Ride. So I hope to get around to some new videos published later this year.