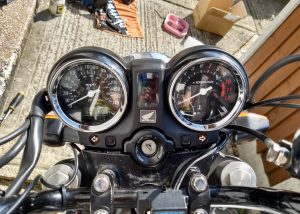 When we first picked up Mary’s Honda CBF500 it was clear it hadn’t always stayed rubber side down. It had various bits of cosmetic damage, which I have progressively fixed up as parts popped up cheap. One of the last items to address was the speedo tachometer case which had a few cracks and was taped up. Genuine Honda CBF clocks are expensive (£300+), second-hand Honda instrument clusters aren’t cheap (£100-150 odd) and are often missing mounting lugs. So, when I spotted a cheap Chinese replica speedo clocks casing for £25, I was of course intrigued and figured it had to be worth a punt. 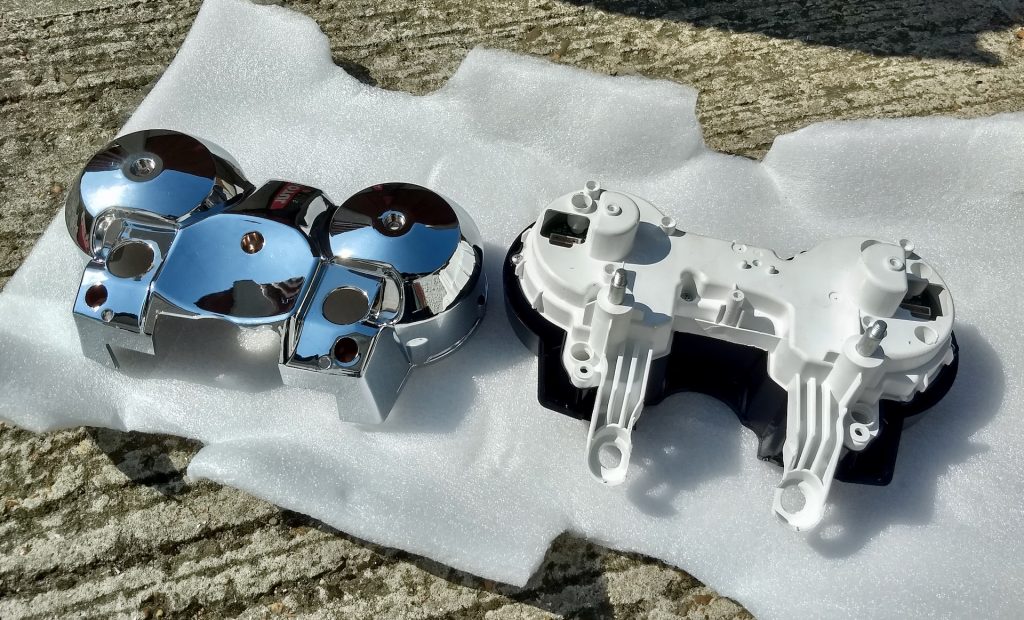 The replica speedo clocks casing arrived after a couple of weeks direct from China, thankfully marked accordingly to avoid being hit by VAT, customs duty and any extortionate handling fees. Nice one. I also ordered a bunch of genuine mounting bolts and grommets from Fowlers that I was missing as these were only a few quid. Call me pedantic, but I can’t stand a bike splattered with crappy random bolts, it just causes agro on future jobs. I also picked up a £2 Honda wings emblem to stick on the new clocks for the finishing touch.

First impressions of the speedometer casing were good, but with this sort of stuff it’s only when you try to fit and line everything up do you find out whether you’ve got a far Eastern lemon or a half-decent bargain.

I dismantled the old clocks and slotted the speedometer and tachometer electronics and dials into the replacement motorcycle clocks. Generally the fit was good, but a spot of filing was required where the two odometer buttons mount to ensure they sat well. I also found a couple of the screw holes hadn’t been drilled. No biggie, just a 5-10 min job to tidy up these loose ends. The loom needed plugging in before the rear chrome effect half of the case can be bolted on, and thus the rear cover assembly had to be lined up and carefully fitted in situ on the bike. The trickiest past was the final slotting of the clocks into the mounts and underneath the top yoke ready to be bolted down, which needed some careful prising to line all mounts up. 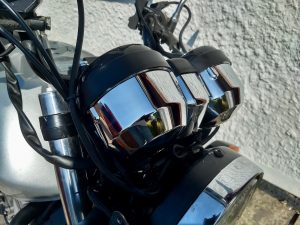 Cosmetically, the mock chrome of the plastic case looks very reasonable. The lenses on the clocks are clear and offer good visibility, though I have seen some steaming up inside on cold days. Robustness wise, it’s only been on the bike 3 months, but is holding up well and seems sturdy enough.

For £25 delivered, you can’t really argue with the price. Quality-wise, it’s not bad at all really, well worth the money. Some minor tweaks were needed when fitting, but no big deal, however the steaming up of dials is a definite downer. So, if you’ve battered your instrument cases and are in need of some cheap replacement motorcycle clocks these are well worth checking out.