Ever since last August when I attended a track day taster with the Kent Fire bike crew, I’ve been itching to get back onto the track. Once you first bomb it round the track, the bug bites and you just want your next fix. My next hit came in the form of a road bike only day again down at Brands Hatch Indy circuit. 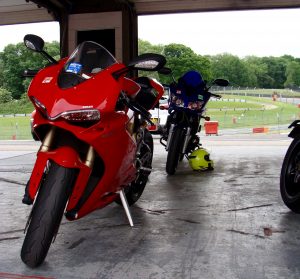 The day was split into 4 groups of ability which ran in sequence with 20 -15 minutes each. But before getting on the track some formalities needed to be sorted; registration, a briefing session and of course the dreaded noise test. I attended the day with some friends (on a Ducati and an MV that put my Fazer to shame), but we also shared a garage with others we met on the day. There was a friendly atmosphere of camaraderie, with all enjoying themselves.

…a couple of sighting laps to familiarise the track and warm up our tyres – not something to dismiss.

The first session started slowly as we followed the instructors for a couple of sighting laps to familiarise ourselves with the track and warm up our tyres. Not something to dismiss, as I was soon reminded when I felt the rear slip slightly on Graham Hills bend early on. With only two left handers, one side of the tyre takes longer to warm up. In the second session we also had a red flag incident as someone lost it on Paddock Hill Bend one lap in. 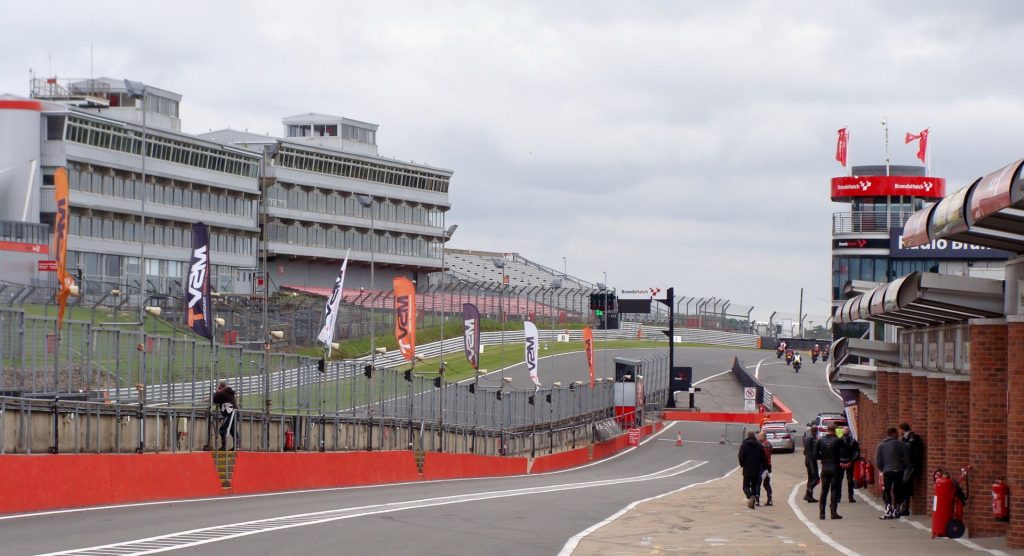 Wisdom suggests the honing of skills at a slower pace than your max, then slowly build back your speed.

The rest of the day went well, the rain threatened, but thankfully stayed away. In each session, I practiced my lines, aiming for the apex cones, slowly gaining more confidence. Wisdom suggests the honing of skills at a slower pace than your max, then slowly build back your speed. Not an easy mantra to follow when on super smooth tarmac with no speed limits. I booked a little tuition from one of the resident instructors, who first showed me some good lines, then followed me to later provide feedback on how to improve. Really useful and gave me stuff to work on through the afternoon.

In general I found my Fazer 600 great on the bends, but a little lacking on the straights compared to other riders on litre or dedicated sports bikes. The Brands Hatch Indy circuit is however quite short at 1.2 miles with only short straights, so no big deal as I often caught up with others again going through the bends. I never found my skills held back by the bike, I doubt I personally could have lapped much faster on a bigger bike. I often felt I was leant over to my max, but never did I manage to get a knee down and my riding appears quite tame in photos from the day. Perception is everything 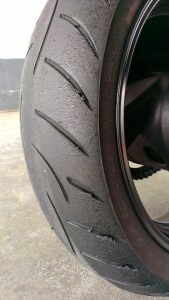 I had an enjoyable day, a long and deceptively tiring day as I found myself shifting around on the bike far more than I normally would. The 20 minute sessions were ample for maintaining concentration and allowed for breaks to take on much needed fluids. Throughout I continued to learn more, get a better understanding of my bikes limits and had lots of fun. I’m now just eyeing up my next track day foray.

I know many are reticent to take their only bike, which they may also use as a daily commuter, to the track. And yes, there is some risk, however compared to a spirited weekend ride on pot holed country roads around blind bends and dodging careless drivers, it isn’t really any riskier. The tarmac is smooth, the traffic one way, wide open bends, no junctions and marshal’s flagging up any hazards. With few external risks, it’s ultimately  down to you and knowing your own limits and riding your own ride.

Check out track days around the UK with MSVT here.