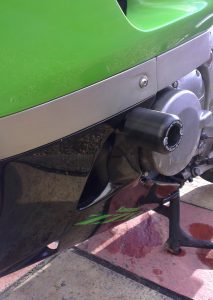 Over the weekend I fitted some R&G Crash Bobbins to Mary’s ZZR400. Sometimes more affectionately known as frame sliders, these lumps of hard plastic stick out from the side of the bike with the intention of stopping your precious fairing from getting scuffed or cracked should you drop your bike. Since Mary is a little on the short side and the ZZR400 is quite heavy (as it’s just a sleeved down version of the ZZR600), we figured crash bobbins would be a prudent move.

Initially, I was hoping to install them in place of one of the fairing bolts, rather than having to drill a large hole in the fairing. Unfortunately, these bolts are too small to take the bike’s weight and would probably just bend or snap off in the event of a drop. So alas, two large 28mm holes through the lower belly pan to the main engine mounts it is then. 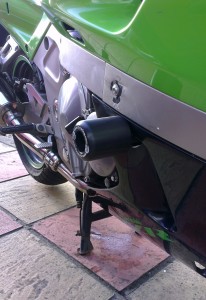 Lining up the holes to the engine bolts is a bit tricky. The instructions suggest removing the belly pan, loosen the existing bolts, dab a blob of paint on their heads, then replace the belly pan sides and see when the paint ends up on the back of the fairing. This works reasonably well, however, the holes are near some vents where the fairing does not lie flat. As such only one edge of the bolt head makes contact with the fairing. So a little guesstimation is required to locate the exact spot to drill. My local hardware store didn’t have a 28mm hole cutter, 30mm was closest. Thus my holes were fractionally larger than need be, but at least it gave me some leeway on the location of holes. The part of the bobbins that goes through the fairing is much narrower than the bit on show, which nicely hides the edge of the hole cut through the fairing.

Overall, very pleased with the job. The bobbins weren’t cheap but should save a packet on repairs if Mary ever drops the bike. Of course, she won’t, but by sod’s law, she would inevitably drop it had I not fitted these!

If you want some R&G Crash Bobbins for your ZZR400/600, check out these items below.