As with many budget bikes, the stock suspension on my Yamaha FZ6 S2 was pretty basic. Sure, it did the job on an average ride, but it didn’t inspire confidence when pushing on or when you hit a particular bumpy bit of road. With over 20k miles on the bike, it was also beginning to show its age too.

When evaluating FZ6 suspension upgrade options, it quickly becomes apparent one can easily spend a lot of money. When you have an old bike that’s only worth a couple of grand, it’s difficult to justify a big outlay upgrading it. After discussing suggestions from friends and other Fazer riders on various owner’s forums, two suggestions kept coming up:

So who was I to argue such tried and tested wisdom?

Nitron is a British firm, who has been designing and manufacturing quality suspension for various motorsports for the last 20 years. They have a solid reputation for producing great shocks for many budgets. Similarly, Race Tech is a Californian firm that has specialised in quality suspension upgrades and parts for all kinds of vehicles for the last 36 years. 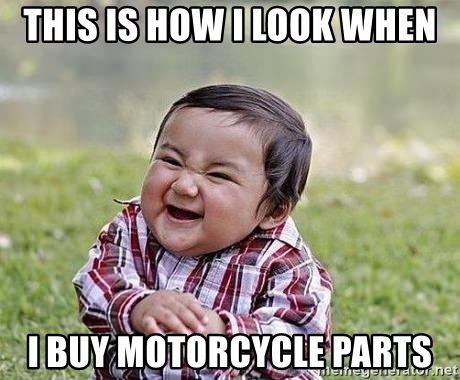 Both Nitron and Race Tech brands I found stocked by PDQ Motorcycle Developments and in a recent sale too good to miss. Out came the credit card as I rubbed my hands in anticipation of the new toys in the post.  I opted for the basic 1-Way Sports Nitron Motorcycle Shock, which has a single damping adjuster to control rebound and compression, plus pre-load adjustment. This I managed to blag for the very reasonable price of £370; more expensive than other budget brands like Hagon (as fitted to my last Fazer) or YSS, but it promised to deliver better performance than these.

For the front, I went for the Race Tech Gold Valve Cartridge Emulator kit and fork springs. The pair of which replace my stock damping rod fork internals with a tuneable value that sits under the new fork springs to reduce harshness and inconsistency. These were a little lighter on the wallet, with the springs and emulator kit together setting me back £235 in the PDQ sale.

Getting quality suspension on your bike is just the beginning. Getting suspension setup and tailored for you, your bike, and your riding style is just as crucial. When ordering a motorcycle shock absorber you will be asked for details on your weight, whether you ride on the road or track, and if carry luggage or a pillion. PDQ then used this info to set up my Nitron shock just right for me before posting it out. This did incur a little longer lead time but was invaluable nonetheless and ensured I was good to go with shock pretty much set up right for me and my FZ6.

For the RaceTech Emulator kit, you are provided with login details for RaceTech’s huge database of more optimal settings. This allows you to correlate your bike, weight, fork details, etc to some ideal settings for the valves, best fork oil weight, and length of pre-load rods. For me and my FZ6, it suggested I use 15wt fork oil, 10mm preload and 130mm air gap.

Fitting a rear shock should in theory be pretty straightforward, it is only mounted by a bolt top and bottom, however, the reality is often trickier. Firstly, you need a centre stand or a jack to lift the rear of the bike up and take the weight off the swingarm. Invariable the rear wheel and any hugger needs removing for access. If it’s been a few thousand miles and years since the shock was last removed (if ever), the lower mounting will have seen all manner of wet and dirt, so expect a tough time removing it. Mary’s old CBF500 was a nightmare, and my FZ6 was pretty tough too even with its stock hugger.

Tip: Buy new shock mounting bolts/spacers etc before tackling the job. You invariable trash the old ones when removing an old shock

The FZ6 rear shock is secured by a bolt at the bottom but has a rod through the swingarm mount and shock lower bearing that provides the main support. This rod, as is commonly the case, was seized in place, has little to get purchase on it and there’s no access to bash it out from the other side. After trying all the lubes, anti-seize sprays, moll grips, heat etc, I had to resort to angle grinding a slot at the end of the rod to give me some purchase for a drift bar and big hammer (see right-hand pic above). I was then finally able to get the rod to rotate slightly and eventually loosen enough to remove with moll grips. Once removed, everything else was straight forward and the new Nitron shock bolted on with no hassle.

Fitting the RaceTech Gold Value Emulators is a bit more involved. The forks need removing and stripping down. The stock damping rods need holes drilling in them to allow oil to flow freely through them and thus delegate the damping to the gold values. The forks then need rebuilding with the gold values mounted on top of the damping roads and held in place by the new fork springs. They’re then filled with fresh oil leaving the correct air gap. Fresh fork seals were ordered too since the originals were a few years old even if not yet leaking. Overall, it’s a job that’s manageable by someone used to a bit of spannering who has the tools, but it does require a bit of labour. I cheated and took my bike and the RaceTech kit to my local friendly motorcycle mechanics and paid them to fit everything for me! I may have missed out on the finer detail of the install, but my bike was ready much sooner and I had the confidence everything was done just right.

The million-dollar question, of course, is how well does the bike perform now it’s fitted with the Nitron shock and Race Tech Emulators kit? When comparing against suspension over ten years old and fork oil, almost anything is likely to feel better. So as you’d expect, there was definitely a marked improvement, the first thing I noticed was the fork upgrades reduced the dive on heavy braking which in turn gave more stability. The set-up was slightly harder than the old suspension, but still absorbed bumps well. It inspires more confidence with the bike feeling more planted in the bends as you progressively power on and out of them.

One year on from the upgrade, I’m still very happy with it and haven’t encountered any issues. To nitpick, I could moan that the pre-load adjuster tool supplied by Nitron is too big and chunky to use in the limited space of my wheel arch. Instead, I have to use a slimmer Allan key. More ideal would be the remote adjuster option, something I didn’t opt for due to the additional £200 premium it would have added to the bill.

Setup wise, I’m still running with that recommended by RaceTech and PDQ based on details I initially gave. The RaceTech emulators have a lot of scope for tuning and I would probably get a better setup with the help of an expert suspension tuning firm who can tailor everything perfectly for me. Something that is definitely on my to-do list. However, tuning the Race Tech Gold Valves does require removing the top fork caps, pulling out the springs and then fishing out the valves. There are no easily accessible adjusters to hand.

In the past, I rented for a few days a big Yamaha Super Tenere with full active Öhlins suspension, and this Nitron-Race Tech upgrade to my FZ6 is definitely not in that league of ride quality, but then I’ve spent a fraction of what such an Öhlins set up would cost! And therein lies my conclusion, this Nitron shock and Race Tech Emulator kit combo offer a respectable upgrade at a reasonable price that one can more easily justify for a lower value bike. Well worth considering if you want a modest upgrade or just want to sort out an old bike with tired suspension.

Check out suspension goods at PDQ Motorcycle Developments here. Blag15% off in their winter sale with discount code WINTER15.