It seems like the Honda CB500 has been a staple commuter bike since the dawn of time when wheels were invented and some prophet stuck one in front of the other to courier stone tablets about. The CB500 is slightly older (pre-2004), but both share a nigh identical parallel-twin 499cc engine. Early CB500’s (pre-1997) had a rear drum brake and later CBF500 had the option of ABS. The 2004 Honda CBF500 also swapped in an adjustable rear mono-shock to improve handling.

The Honda CB500S variant had a bikini fairing, but the rest were all naked. For years the CB/CBF500 was the default and ubiquitous choice for couriers and training schools. They are insanely reliable and often keep on going into six-digit mileages. Expect a solid and capable commuter, just not the most exciting. Prices can start very low for older tatty examples and later ABS-equipped models do demand a premium, but a decent one can be had for below £2000. Insurance is dirt cheap too. All of which puts the CBF500 top of any first big bike recommendations.

As with any old, well-used bike, check if downpipes are rotten or fork’s pitted, and any particularly bad damage from inevitable mishaps. Also check the lower shock mounting on the swing arm of the Honda CBF500, as this is exposed to crud from the wheel and can seize up solid. Unfortunately, a centre stand wasn’t standard. 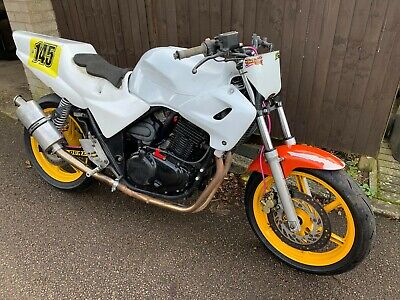 What about the CB400 Super Four? A friend of mine has one and he never stops raving about it!!

Great site mate, keep it up!

I started on a Super four (grey import, same engine as CBR400RR). I wouldn’t recommend it, as service parts were hard to get hold of, and there wasn’t much support for it due to it being quite a rare grey import. I should have gone with a slightly more expensive SV650.

I think the ER5 has to be considered along side the CB500, and would think early ER6s are falling into this first bike territory now.